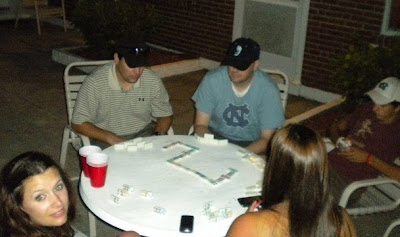 Strange we are engaged in two wars overseas but the headlines are dominated by anything not having to do with politics or war. I think more should be done to acknowledge their sacrifice and service.

Anyway, played some Texas Hold'em with Jess’s cousins and got a sprinkling of unnecessary run-good. Man… if I flopped like I did in those games at the last three Harrahs events things would have been a lot better a couple of months ago. Bam! Flop a flush. Bam! Turn the nut flush, Jess’s cousin turns second nuts. Why is it I’m deep in a cash game when that happens and I’m on the losing side of things. I’m on the winning side dragging pots like I’m breathing when it’s a friendly game.

Need to stop wasting my run-good in games like that. Might as well not play them. Lol.Anyway we played six times. I won the first five. Got to heads up in the sixth with a big chip lead and tried to bluff her unbluffable cousin. Running so good I thought I was bullet proof? Maybe. It’s happened before. Should have worked on my Omaha poker game instead it would have been a good opportunity. Course I don't want to turn my wife's cousins into degens probably won't sit well with the rest of the family.
Yeah some of us also played some dominos and well I kind of suck at that (though I do know how to stack them). Don't think I won a single game. Maybe I just run bad or everybody that plays that game are too solid. Lol.
We’ve been dealing with a lot on the Gulf Coast, with one recovery still ongoing, another one just beginning and at the same time a lot of families also dealing with children and parents overseas. We’ve got a lot on our plate and I’m impressed by the resiliency of folks dealing with these events all at once. I’m surprised by the numbers of just how many people read this blog so to all of you affected by the war, the oil spill, and the lingering effects from the hurricanes of recent years stay strong and keep persevering.
My grandmother in Pensacola, had to deal with Ivan as well as the perils of being in her 90s too, these last few years so it was good to visit her on the way back. Second living great-grandparent still alive in their 90s for our son. Sounds like our kid should have a long life—huh? Unlike Jess’s grandfather my grandmother has been in and out of hospitals a good bit the last thirty years. She just keeps on absorbing blows and keeps on trucking.

She’s broken both her hips and insists on driving herself and using her walker as little as possible. She’s had multiple heart attacks, leukemia, infections that have put her on the edge and still she survives. Seeing her is always an inspiration. This time though she lent me a book she’s been reading that’s full of End of Times stuff. Really kind of eye-opening nonfiction, though I’m compelled to look up the “facts” of supporting what I’ve browsed so far.

The gist of it is that the Muslims are attacking the Western world, in a number of manners and we are kind of ignorant of it. Part of the invasion is to immigrate and have more children than the home country. The rapid changes to France and England should be warnings to us in the U.S.
Some truths in there I’m sure. It’s just weird to see such a pragmatic woman embrace some weird ideas so late in life. Not the first book I’d think would be on her bookshelf. Seemed like the text was more interested in fomenting fear (and maybe hate) then doing anything else. Anyway, I guess I should really only worry if she starts attending rallies and really getting involved in these things. Lol.

Anyway, it was a ton of fun, especially just listening to the wife’s family trade ghost stories and funny stories. There are a few movies in her Aunt Brenda’s life that somebody needs to write. Maybe one day I’ll tackle that challenge.
dominos florida gulf coast poker omaha poker texas holdem vacation venice