Showing posts from September, 2007
Show all

WEEKLY COLUMN--Would you call a "made hand" with one card to come?

I'm at Harrahs on Monday night playing some poker against the New Orleans regulars and the folks from Biloxi that come into town to steal from drunk Monday Night Football fans. Sorry Titan fans if we were inhospitable to you on the felt but you realize you are walking targets, and the entire time you are playing three or four people that barely know one another are exchanging glances about your pisspoor-I-saw-it-on-TV-play and are just sitting there waiting to snap you off when you overplay two facecards or AJ or a low pocket pair.

Anyway, I get there early to try and squeeze juice from the walnuts. The walnuts being the other regulars all biding their time until the football game is over and the unhappy or happy drunks show up. Yes, they are a bunch of Martians (very rocky) for the most part like myself, so shown down hands are usually premium holdings vs. one another.

Why even bother to get there early? I like the Harrahs Football Box promotion where they give you a score and you …
Post a Comment
Read more

September 27, 2007
My pick this week is Denver to lose. Looking over the last few Colts-Broncos games, the home team usually wins (last year Indy winning on the road being the exception). These games are generally tight. Some things to note... Denver is atrocious against the spread of late, makes me think a blowout will be exactly what Mike Shannanhan gets making this a safe pick. Incidentially, have you seen Mike's gameday face, what he really needs is some Colonblow. Also, Indy and Denver are both doing well hitting the over of late (Indy in a dome that is) so you folks that gamble might want to look into that wager. The logic makes sense with this one, you look at Denver and think running team with solid defense, but they actually put up a fair amount of points and allow more than you'd think. Indy in a dome is the Greatest Show on Turf part deux, plus, all their matchups are high scoring affairs. Bang the OVER as my LOW and I'm taking the Broncos to lose.
Post a Comment
Read more

My pick this week...

September 20, 2007
Buffalo to lose. New England at home, a huge favorite, and despite my superstitious meter telling me there is a bad omen around this game, I'm believing the hype. New England is too good. That being said I've noticed usually around week 3 and with a huge line (-15) one of the favorites stumbles in these pools over the years. I'm sticking with New England to win, however, for no tangible reason I think Buffalo stays within a score or two for most of this contest. Turnovers and special teams might do it all for the Bills. Anyway. Good luck everybody.
Post a Comment
Read more

Links of off topic interest--Heads

ALIENS HAVE LANDED (or are they already here):

"Boiling water started coming out of the crater and particles of rock and cinders were found nearby. Residents are very concerned," he said.
http://news.yahoo.com/s/afp/20070918/sc_afp/peruhealthoffbeat;_ylt=AulJd35lsQZ42zuJdUmLa4cbr7sF

Sounds like a sci-fi movie, but it really happened. Meteorite lands and explodes, villagers get sick.
We should start to get worried if they all start wearing scarabs attached to their brain stems.
Brittney Spears uses drugs?

Speaking of aliens.. http://omg.yahoo.com/witness-in-custody-case-says-spears-used-drugs/news/2494
As for the following little tidbit....
"In yet another development, the Web site for celebrity TV show Entertainment Tonight posted a story citing unnamed sources as saying the U.S. Federal Bureau of Investigation was looking into death threats against Federline."
Contract killers after Kevin Federline? Huh? What did he do piss off the hip-hop dance mafia? Or did his song real…
Post a Comment
Read more

September 17, 2007
Thought I'd discuss a crazy hand I got in a Horseshoe tournament. It was rebuy event so I think this made the following more likely but it is probably the first and last time I'll knock out 5 players at once.

We start off 11 handed and the table is playing pretty wild with everybody digging deep into the wallets for multiple rebuys. I like this, as my strategy is to sit and wait for premium hands and get paid off (I r smart). I start off like an idiot when I muck my leading hand after a guy folds to my post flop bet, all the while another guy was still in the hand. The dealer tells me three times that she said, "Three people in the hand." Thank you sweetheart, let's move on. I'm not mad at you, let's move on. Got it. Yes, we all know I'm the idiot. Move on. Then I go card dead.

I look at A10 suited in mid to late position. A guy in early position 3x's it and 4 people call before me. I called and then one more guy called after me. Bam the flop…
Post a Comment
Read more 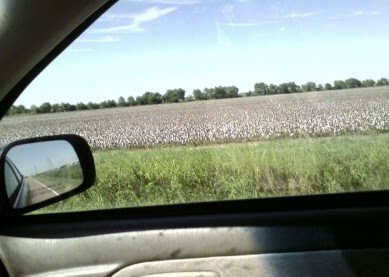 Just back from Tunica. Will have some poker updates soon. Second time there but I'm always impressed by the landscape. Great swatches of cotton and in the distance a casino pops up. One such was the one I stayed at which was Sam's Town. It had the look and feel of a 1970s Vegas movie. Ironically enough Sam's Town was having a classic car show this weekend. I enjoyed the muscle cars lined up out front of the place on Thursday. Thought I'd see a big tie wearing rough and tumble 70s sort come sliding across any of those hoods at any given moment. Definitely a bit of a surreal experience. Made me want to look for the Seven Card Stud game.
1 comment
Read more

September 11, 2007
I'm already in the loser's group of the elimination pool. This week I'm taking Tennessee to lose. Took Jacksonville to win last week, so I'm on a mission.
Post a Comment
Read more

What a tumultous week...

A lot of you know about my mother being hospitalized and getting multiple blood transfusions as she had life threatening low levels of hemoglobin. After every possible test they still can't find the source of the problem. Usually it is either internal bleeding or a blood disorder or something a little more omnious. They can't find the internal bleeding. For now, they are going to wait to see if her hemoglobin, which has increased, did so as a result of the iron shots she received or only because of the new blood from the transfusions. Still, the fact that she is healthy for now is tempered by not knowing what's causing it. The good news is now she can walk up a flight of steps without being wiped out for the day.

On the other side of the coin, I'm a proud uncle again as my brother had his second child last week. Congrats to him and his wife Miki. We are all very excited to have a new addition to the family. She was 9 pounds and 20 some odd inches.

While all that was goin…
2 comments
Read more

Photos from the Beau... 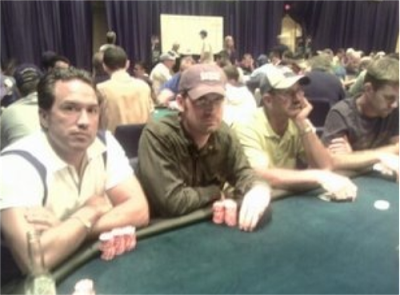 I rolled over this table.


"DON'T TAKE MY PICTURE!" She screamed.
Eddie's stack is bigger than Brian's.

September 01, 2007
Played a lot of poker these last two days. The beats kept coming. Had a reprieve when the deck absolutely ran over me in a single table $125 satellite.

Still when I get a chance I'll talk about Aces negatively affecting me in three separate ways. The maxim anybody can play aces doesn't apply to me apparently. I'll get to that though when I get a chance. Trying to get some photos online for now.
Post a Comment
Read more
More posts