International Sports, the World Series of Poker, and War-Time Games 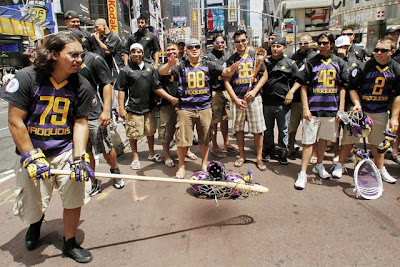 With the World Cup, which I immersed myself in for a month, and now the World Series Main Event, I'm repeating immersion. Sorry, wife and son. It's been a grand series so far with a fair amount of players locally many of who's poker room is online rather than real doing great things. Course to them poker tournaments are just poker tournaments whether it is a mouse they are wielding or a chip stack.

Before I get into the WSOP, which I will with a post tomorrow, especially with all the local guys doing well, there is another international tournament that caught my eye with this news item. The Iroquois Nation’s Lacrosse team, ranked fourth in the world can’t get clearance to travel internationally for the World Championship in England. Seems the Brits won’t recognize their passports. These guys had to scrape together the money just to play in this thing and burning through money hoping to catch a flight. They’ve already had to forfeit their first game against… England.

There is some irony there. Been reading a biography on Andrew Jackson where to set the scene a bit the author talked about the pre-Revolution history regarding the French, the English, and our American Indians. In one memorable rout where the Indians kicked some redcoat ass they devised their own type of Trojan horse. This misdirection was every bit as savvy as the one in Troy but gets far less press.

There was a local tribe that lived somewhat near one of the English frontier forts who used to play their games of lacrosse in front of the fort. The English soldiers would come out and watch (perhaps that’s why they play Lacrosse in England today) and cheer on the action. They shared an uneasy friendliness but games tend to tie people together. In World War I after all they stop fighting one Christmas day and the Germans and the Brits played football (soccer) against one another on the swatch of land that stood between their trenches. Wonder if a ball bounced tantalizingly close to a goal line in that match too.

So back to the English in the colonies, one day the Lacrosse game (which I believe back then was played without boundaries and tended to cover great distances) appeared by the Fort. The English had been warring with neighboring tribes but not with the locals so they came out to watch. Little did they know that a deal had recently been struck with Chief Pontiac and those Indians. They were there for more than just lacrosse. After some back and forth, with some raucous cheering by the soldiers who lined up by the action, one of the players sent the ball near the now open gate where many of the wives and families of the players had been cheering.

The players rushed after the ball but quickly diverted to their wives who had been hiding battle-axes under their clothes. Dropping their lacrosse sticks, taking the axes and storming the fort the Indians massacred the English in one of the bloodiest massacres of the time. For a time this was a pretty pivotal victory for the federation of Indian tribes in chasing the colonizers away. They set out to leave an indelible impression and they did so in ruthless fashion. First hand accounts had the Indians scalping women and children and drinking the blood of their victims.

No wonder, the Brits don’t want to let them in their country for a Lacrosse game.

Ironic history aside, this is kind of bullshit on many levels obviously. I’m rooting for the Iroquois to get over there and win the tournament. I think they stopped drinking the blood of the English a long time ago so the Brits should stop worrying.