Showing posts from November, 2007
Show all

November 29, 2007
I've decided to play the juicy cash games running concurrently to the donkaments. I've heard how outrageous the busted tournament players are but I had no idea. Why aren't I a busted tournament player and now merely a cash gamer? I'm tired of the bubbles or min-cashes. Like Austin Martin alludes to in his blog, I feel entitled to win because I see "lesser" players riding luck to bigger cashes. The frustration has built to a head. So, I should take a break from the heartache. That means, I'm heading to Harrahs early 2morrow morning. If I win $340 plus before the 3:00 tournament, I'm playing it as freeroll. I never learn.

Playing stictly cash today I was amazed at how EVERYBODY takes a bad beat to get knocked out of the field. Nobody gets their money in bad anymore? I thought it was just me (sarcasm). Every 5 minutes somebody walked into the poker-room talking about flopped sets and runner-runners to put them on ice. Granted as stacks get sm…
3 comments
Read more

A critical hand for me had nothing to do with a bad beat. Got Q rag in the big blind. Middle position min raises with one caller. Small blind folds. With the antes I feel I'm getting the right price, plus the raiser and caller are somewhat tight so I can steal when the flop misses my weak holding. Flop gives me nothing, but my image has been so tight I planned on firing away if the texture was weak. It's 10 6 4. Two clubs. Not too bad. As I calculate what to bet and read my opponents, I see both guys double check their hole cards. Hmm... I put this as a good sign. Lots of time in the face of an impending bet…
Post a Comment
Read more

My sister is active in this. Please help the cause and sign the petition.

November 26, 2007
According to a recently revealed source, the US Army Corps of Engineers conducted an early intentional plan to hide their role in the metro New Orleans levee failures.
Dr. Ray Seed, co-chair of the respected U of Cal Berkeley levee investigation submitted an ethics complaint on October 30 documenting how the Corps of Engineers systematically hid their mistakes in the flooding and intimidated anyone who tried to intervene.
All of this was done, according to Dr. Seed, with the help and complicity of the American Society of Civil Engineers (ASCE), the same group the Army Corps chose to peer review the official Corps-sponsored levee investigation.
Write your members of Congress and demand the 8/29 Investigation, a truly independent analysis of the flood protection failures in metro New Orleans.Click here:http://salsa.wiredforchange.com/dia/track.jsp?v=2&c=CurSw7e7yLlc…
Post a Comment
Read more

November 26, 2007
Virge, or The Verge... as my candidate for MTV's new True Life "I'm an Online Poker Player." After talking with Lusky, Virge, seems a great candidate, though I feel Lusky and Eddie are equally capable and would give us some good drama.

Anyway, tomorrow the Bayou Classic at Harrahs begins. I think I'm firing my first bullet at noon depending on the turnout. See ya'll there.
Post a Comment
Read more

I had great hands until they went through the wood chipper

November 21, 2007
So with 20 left in the tournament today, payout the final 10 and usually chopping at 1k a person, I've amassed 10% of the chips. I've built my stack at that point with ruthless aggression in the tight bubble play aspect of the tournament after spending 4 hours convincing everybody I'm the tightest at the table. No need to mention the suckout I made in a battle of the blinds with A10 suited against Kings to give me half that stack. I raise almost half my stack against the big stack in the BB showing him I was pot committed. He quickly looks at his cards and sez... "All in." Oops, once again dug my own hole. He's got kings. Ace spikes for me. Sweet, I think, finally a tournament where I get the suckouts. Oh, the karmic justice headed my way.

I played with Parfait from Houma, and watched him get knocked out of the tournament with pocket Jacks vs. a guy who called with 3s. He said to the table, "I'll never win those because I never play that bad." It…
2 comments
Read more

November 15, 2007
Yesterday, I had a pretty good run. At critical time I utilized some tells and though I didn't turn a profit on those hands, in fact my tournament strategy told me to go against my reads, it did get me thinking about tells, when you should listen to them, and the perils of internet strategy in live play because they don't listen to them.

Rewind to yesterday. I got that warm and fuzzy feeling as my stroked ego told myself, "You are the best poker in the world" as I luckboxed into these 3 hands:

1. Middle set over bottom set. I'll double up thank you. Yes, I'm a genuis not just lucky. It was amazing how I extracted every possible dollar out of that hand (sarcasm alert for those who can't read it).

2. Short stacked and bubble time with two short handed tables left, I got 6-4 in the big blind. SB limps. Flop is A57. I bet out with my draw. He calls. For some reason I'm fairly confident he doesn't have an Ace. Actually I'm sure, he's raised every …
1 comment
Read more

Thoughts on the Acadiana Poker Series

November 12, 2007
The two day tournament to benefit the United Way was in a way a victim of its own success. I talked to a number of players there and they told me last years event had over 700 people play. The event was slammed and understaffed to accommodate such a swell of people, again this is according to the players.

This year, with a great effort by the Small Town Poker Tour, they had plenty of tables, dealers, chips, drinks, and anything you could ask for. Unfortunately, I fear many of the players didn't return because of the chaos of last year. Team GCP didn't get on board to promote the event until three weeks prior to it and I think the traveling players from New Orleans, and Mississippi were really torn.

The IP Classic, which Team GCP attended on Wednesday and Thursday, had started and held their biggest event turnout wise that Friday. We were in Lafayette and heard stories of many of the players we know opting to go East instead of West. To be honest, they missed out.

November 12, 2007
He represented TEAM GCP well this weekend. I sweated him a good bit in his mega on Friday and was very impressed with his play. He induced calls when he had the best hands and he laid down when he needed to. There is tactic of Gene's, which I won't give away, but he is a big proponnent of that he really worked to his advantage. For those in the know, he "worked" it.

At one point, the only stack at the table that could knock him out, when they were 5 handed (4 seats) went all in for just the blinds. It got to Gene and he mulled it over for a long time. In my own head, maybe the only hand I play there is Aces (don't need to win the tournament just need to win a seat) and I might even lay that down. After an excruciating amount of time he pitched it. A couple of hands later he asked if the guy could beat pocket 10s.

What?!? Pocket 10s. I figured I had to call a T.O. and get Gene's head straight. I actually tapped him on the shoulder and got him to step …
Post a Comment
Read more

Had a blast at the United Way Acadiana Series of Poker. There was a great opportunity to play for prizes and it was an entertaing field interested in having fun. Those that didn't make it really missed out on a well-run tournament and a great facility.

My strategy was simple. I thought there was going to be a lot people being a little too aggressive with their rebuys as a plan B and the blind schedule gave me enough time to wait around to snap them off.

I made it through the rebuy period, doing just that and doubling up on some big hands: AA, and AQ (vs. AJ who called my button semi-bluff). I had plenty of chips to make it through the first night and I was glad to see at my table the best hand for the most part was holding up. Well, with one exception. A gentleman kept getting it in bad and kept sucking out (44 vs. AA). Though he kept overplaying his hands to see flops but if he didn't hit he'd get out. 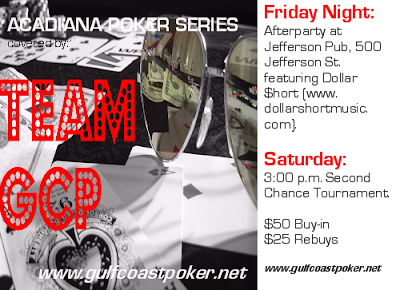 Just another reminder the acadiana poker series is tomorrow. We hope to have hand outs at the event. Looking forward to seeing everyone at the Cajun Dome.

Early thoughts on the IP

November 01, 2007
Played Halloween day at the IP and it was ghoulish for me. In the noon tournament I finished in the 30s in a small field. With only 119 entrants it felt like a Harrahs wednesday tournament, except the structure allowed for some play. I started out pretty hot, flopping a flush in the big blind (82) and winning a pot as chasers called and didn't connect. Got aces with everybody folding to the button who limped. I raised, BB folded, button called. He folded post-flop. Then I made a good read on a guy that he held more than me. His Ace-five (Aces full of 5s) would have crushed my AK (aces and 5s with King kicker). I list those hands because they were the only significant ones I got involved in until I went card dead.

When I say card dead I mean zombie dead. 7-2, 7-2, 7-2, 8-2, 8-3, 7-2. It was also one of those days where I didn't even get to sweat flops. Even my folded hands weren't connecting. I guess if I were a better player I could have made something from nothing. However…
Post a Comment
Read more
More posts