Showing posts from June, 2018
Show all


As many of you probably know, Harrah’s New Orleans partnered with www.gulfcoastpoker.net to get local poker enthusiasts into WSOP Circuit Event tournaments for free. Poker room manager Chase Haydel gave away over two hundred seats, and seven of them were part of GCP’s social media giveaway. After catching up with most of these recipients, I’m pleased to share a few of their stories.


Originally from Spokane, Washington, Todd Cowan moved to the Gulf South in 1997 on assignment as a locomotive engineer. In those early years, he often played 10/20 limit hold ‘em at the Isle of Capri in Lake Charles (not to be confused with the Pile of Debris on Lake Marl). After Chris Moneymaker lit the no-limit hold ‘em world on fire, Todd traveled to Las Vegas in 2005 and enjoyed the highlight of his poker career: a victory in the $1,000 Bellagio Weekly NLH Tournament for $45,396. This year, thanks to his free seat, Todd entered Event #1: $365 No-limit Hold ‘e…
Post a Comment
Read more 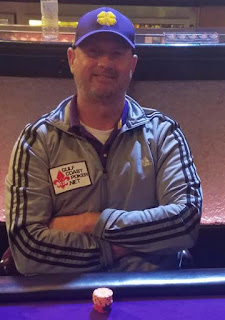 First off: Hello world, it's been some time:

-After much delay decided to add a Group to our Facebook page. Originally wanted the GCP Facebook page to essentially become what Facebook's group are primarily and that's a  forum/community. However, when people post on our main page it's generally not obvious to the reader. Tends to get buried. So hopefully on the new groups page it will allow for the exchange of ideas, selling of packages, sharing of news, hand analysis, and generally be a positive community. Please asked to be added and please don't indiscriminately "add" people... more than a few of us feel quite spammed when other groups do that, so I'd rather that ill will not be directed to the site. Moderating is generally not my thing but if everybody keeps things civil and we'll be all good. Who knows maybe there are too many other places already for this to take off but it's an option we feel is overdue to …
Post a Comment
Read more
More posts