A critical hand for me had nothing to do with a bad beat. Got Q rag in the big blind. Middle position min raises with one caller. Small blind folds. With the antes I feel I'm getting the right price, plus the raiser and caller are somewhat tight so I can steal when the flop misses my weak holding. Flop gives me nothing, but my image has been so tight I planned on firing away if the texture was weak. It's 10 6 4. Two clubs. Not too bad. As I calculate what to bet and read my opponents, I see both guys double check their hole cards. Hmm... I put this as a good sign. Lots of time in the face of an impending bet, most people in my experience do this to see if they at least have a draw after missing the flop. I fire away. Middle position thinks for a long while and calls. Two clubs on the board. Flush draw. Second guy folds. No draw.

I decide if a club doesn't come on the turn I'm firing and getting him out. K of hearts hits. Blam I fire. He moves all in. Math says I have to call if I have anything, but I don't. My two bets have put my stack on life support no need to pull the plug yet. I fold. I tell him he's got K10. I find many people are more likely to show when you've guessed wrong because they can reveal to the table they outplayed/out-thought you and he does just that showing QJ of clubs. Do that next time you want to see a guy's holding and guess wrong with some assurance and you'll be surprised how often they show.

So he was ppen ended with flush draw (and Light years ahead of me). My read was right, my instincts were true, but I run into just the wrong card. King gives him more outs. Course if he thinks his Q and J are live with me having a holding of say A10 then he's priced in as a 45-54 dog. If that's his thinking he was also right to make the flop call as he was a 61-30 favorite.

Here's where I hurt myself. I got a draw read on him and I was right. Yet, he had such a strong draw he was a favorite to the hand I was representing. Ultimately, it goes back to the fact I was playing Qrag out of position. I easily could check the flop with two opponents and bail in the face of a bet. Hell, this hand could have been checked down and I could have paired my rag for an unlikely win. Or I could have said pot odds be damned I got Qrag and folded preflop.

Then again, I've never won a tournament or gone deep without making moves of this type every hour or so. I had the chips to spare but not to spare what I bet. Maybe I could have put out a smaller feeler bet instead of trying to steal. Or not bet the turn as he seemed commited to the hand and maybe my draw read was off. Maybe he was double-checking his pocket 10s to make sure his set was still there.

This was the critical hand for me, as it was one I could control. Beats happen, and I'm going to get my money in good and take them, but this time I got it in bad and got slapped stealing from the cookie jar. It's definitely a hand I'm going to contemplate a little more.

The final hand that took me out was Deja Vu all over again. Like last wednesday I flop top two with AQ. It's all in. KJ hits his straight on the turn when the 10 comes out. Lusky took a bad beat too as he seems to whenever he plays these live donkaments. He had Aces. Flop came out K high. Guy with Kx puts him all in. River came x. Ugh.

Bullet Points and a Crazy Hand. What would you do? 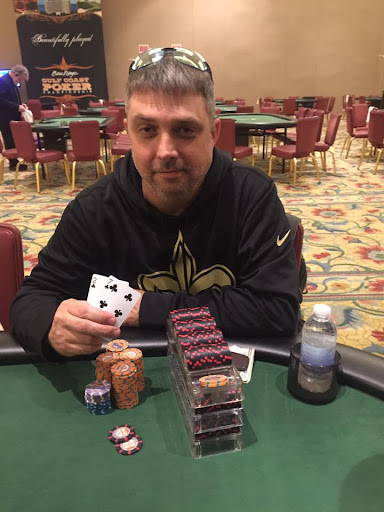 -Soon, I'll get that Hurricane27 article update.  Spoilers:  Super nice kid.  Not a bot.  Owns your soul online.  How he found poker is an anomaly.  More to come.  Soon, I promise.  I'll find the time to write it up and do it justice.

-Wouldn't it be cool to have a GCP.NET Championship?  We think so.  Hopefully, it can happen... somewhere, sometime, soon (?).

-About to go Back to the Beau.  How can you not love the deeper stacks and better structures the Beau Rivage will offer when they go heads up with the WSOP Circuit event in early September.  The pros will be in town chasing points but over at the IP.  Methinks I'll be chasing all that money at the Beau.  Plus, they got Henry Garrison, Derek Dillman, and Paul Dutsch coming in to help.  Great crew there.  Think we are pretty lucky as players on the coast with the staffs at the Beau and with what's being put together at Harrah's lately.