December 19, 2007
Played in the Houma Dead Money satellite tournament. Was second out--stellar performance I know. My final hand involved me trying to steal with AQ suited and short-stacked in the face of a min-raise and call. I had 2500, blinds were 100-200, so 1100 in the pot. The initial caller called, a steady player named Craig, and he had Kings. Well played, I had no idea he was that strong. I hit my Queen on the flop so probably would been the hand I died with regardless. I also bled off some chips with AQ earlier v. AK when an ace hit the flop. I raised, after leading out preflop and the eventual winner of the tournament shoved all in.

I had a good read of strength from him ('You mean besides the fact he put all his chips in?' Captain Obvious). I thought his insta-call of my preflop raise, which brought two other callers along, and his predatory lean in doing so meant I was trailing. The Ace came and I fired out hoping he had a pocket pair or something besides AK. His shove confirmed that he had at least one Ace and a great kicker. Or he had a set of them.

Feeling AK, but not 100% ready to part with the hand, I went into my probing questions mode to be sure. I said, "You aren't worried about me having two pair," he wasn't but suddenly he was. He defensively repeated, "I'm all in." "You don't just have Ace King do you?" I asked. Yep, he did. He said, again, "I'm all in." I laid down. He showed AK. Shame I had a good read on him and couldn't stay in long enough to use it. For the rest of the tournament, Ray played great, made some tough calls, amassed a lot of chips and never let them go. He wasn't afraid to mix it up and just fire away at multi-way pots with agression and it was no suprise he took it down.

I thought Summerall, a Houma tournament player, played really well. He went deep and got knocked out when AJ caught a Jack on the flop and more importantly an ace on the river to beat his two queens. He was in good spirits about the hand and his performance, he should be, as I didn't see him make a mistake at the final table. He mounted a comeback and put himself into contention before taking that beat. Well done, Chris.

I also, played some small freezeout with Robert D. and Dwayne who said some nice things about the blogs and our site. Man, you talk about getting run over by the cards. I had Aces, pocket 10s probably 4 times which also held every time, and flopped straights and flushes. Even the few hands I didn't play I'd end up with the nuts. I literally had the best hand for about 9 out of 10 hands for an hour straight. This was three handed, I was getting the type of hands I'd be crushing 10 handed. It's the type of heat you want at a 2-5 or 5-10 table, and of course I get that killing time with a small buy-in (I know, never complain when you are winning, it is unbecoming).

I have to say, Dwayne thoroughly outplayed me, but couldn't outplay the deck. He kept folding to the better hands that I held. He stayed in the game much longer than I would have lasted if I had his cards and he had mine. I kept thinking, he's going to have to push back at me with nothing at some point, thinking my rush can't possibly still be going on. But my rush continued and he avoided it. Then, I look down at A-Q. Ugh. The hand that had killed me that night. Dwayne is finally getting pressured by his stack, he's short but not so short that if he doubled up he wouldn't have a slight chip advantage. Flop is 556. I bet, he comes over the top all in.

As he is a good player my first instinct is to fold, I really just have air. Then I run through the hand possibilities. He called my preflop raise. Maybe a pocket pair. Maybe two high cards. AQ is pretty good but AK beats me. AJ, KJ, KQ, J10, A10 are all calling hands, preflop, and I think AK is probably a raising hand so I'm ahead of almost all of those holdings. A mid pocket pair makes a lot of sense too, but there are less of those: 77s, 8s, 9s, 10s, and Js, but probably Js and 10s he pushes back at me.

Then I consider how many times I pushed at him with the best hand and he correctly folded. Got to think his patience is worn thin. There was enough at play that he might be making a move, so I said, "I'm making a bad call," because something just told me he had me beat ("You mean all his chips in the center of the pot tipped you off again Einstein?"-Captain Obvious). I made the bad call and he had pocket 9s. I caught a Q for the win. So even on the final hand he outplayed me and the deck just beat him.

The queens salvaged the night for me, covered my bounty we added to the tourney entry and cut off a little bit of my buy-in, so not too bad. There is talk about playing another one soon so maybe then I can get some redemption of my own.

Unknown said…
Bill thanks for the event and for the kind comments. I enjoyed playing against you last PM. I told my wife it was the first time in awhile that I felt like i was playing "POKER" and not just cards. I respect your game and look forward to playing more against you. I wish you continued luck and most importantly to stay away from other peoples luck

Crapped on the Head and Kicked in the teeth part 2 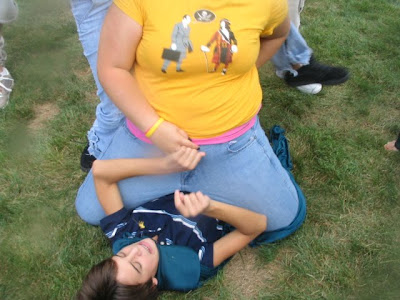 I walk to the car, try to metaphorically wipe the bird crap off my shoulders and contemplate how my bankroll got severely lightened on the day. I recall the fun hands where I got hurt, such as the one when I raised preflop and got a few callers. Flop was 882. I fire out an almost pot size bet and I get a caller. Turn is another 2. I make the same bet and get a call. River is 6 or so. I check, he checks. I show 99. Dealer is about to hand me the pot as he shows 7-2. He points to the deuce for her benefit and the turned full house. At first I think he's doing it for me rubbing it in a bit. My frustration is evident and I fire him a look, then I realize who is dealing, and see that she still almost swept me the pot. She of the 8 deals per 30 minutes and two mistakes per down. You know who she is. The dealer you are suprised to see every time you play there thinking she'd be fired. Still, I wanted to be angry at the dude as even though he wasn't showing me up he was destroyin
Read more

So, in the past couple of posts I've been cryptic about a recent opportunity that presented itself that I said  was really cool.  It is... or I should say was really cool... as unfortunately, my involvement, ultimately, was practically zero. I met with the producer of a new poker show that is filming its pilot in New Orleans a couple of weeks ago over lunch at Mothers.  All this was going on just as I learned of the potential heart condition of my soon to be born son and the expedited delivery to find out if he'd need surgery.  So despite being in a bit of fog in my personal life, I still enjoyed a great conversation about poker, poker in New Orleans, and specifically discussed the pilot and premise of the show.  To be honest it was a really nice diversion.  We had a freewheeling exchange of ideas. I came away happy with the vision of the producer and impressed that one of the aims of the show to really highlight locals who play poker. We also came to the first of what I th
Read more